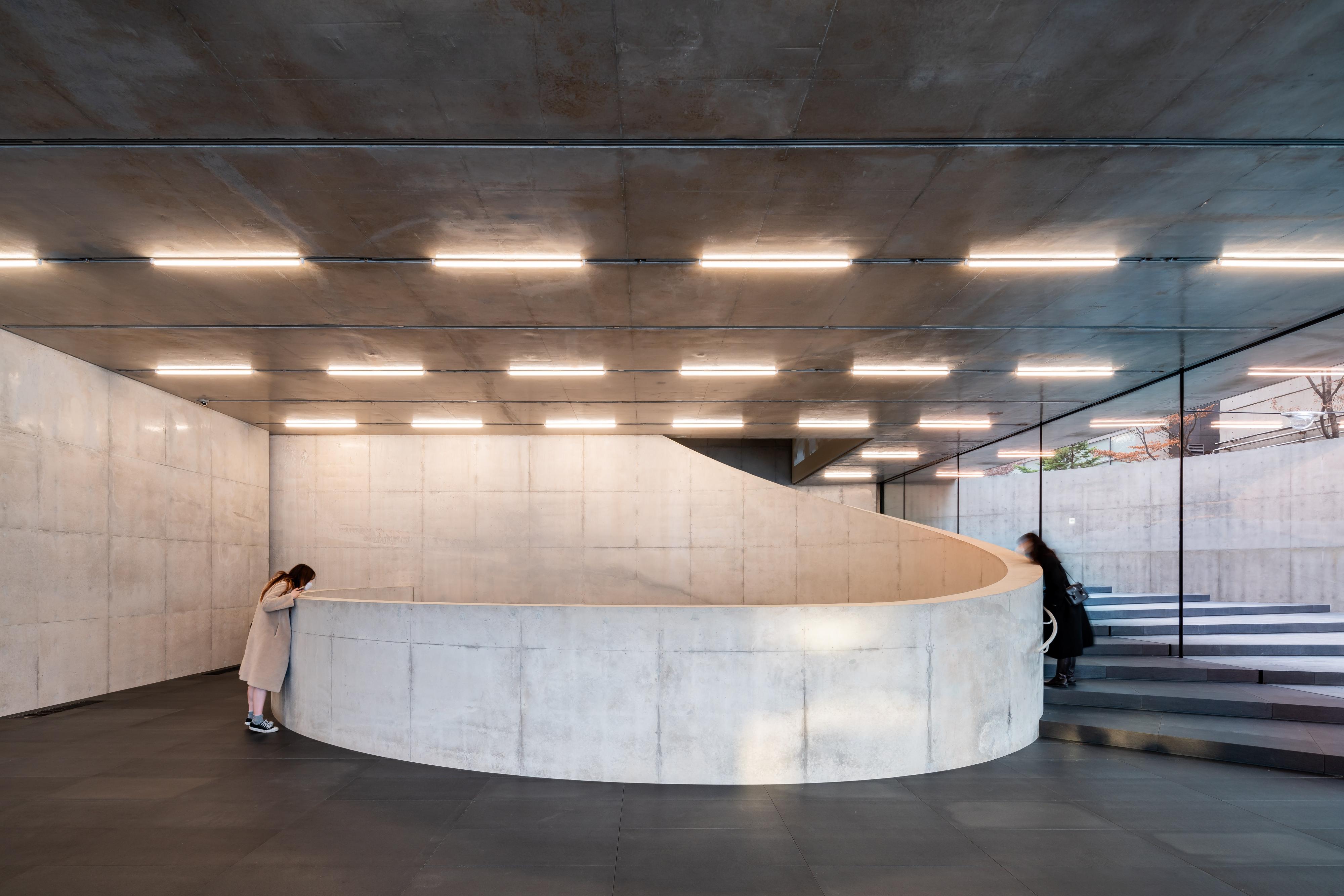 The ST/SongEun Building of the art and cultural foundation of the same name opened at the end of 2021: an art space reconceived as an urban space that makes a highly distinctive statement within the Seoul skyline.

“No. 473” in the Herzog & de Meuron oeuvre is the first building by the Swiss architects in South Korea: it is not a classic art museum that has been created, but a versatile “art space” to promote South Korea’s young, contemporary art scene in the form of exhibitions and events. The front facing the street is archaically simple, with no frills apart from a vertical pair of slender windows.

The imprint of wooden cladding visible in the grey concrete facade creates a haptic sense of liveliness. This is a reference to the client, the SongEun Art Foundation: in Korean, SongEun means “hidden pine tree”. An almost poetic atmosphere is further emphasised by the chessboard-like arrangement of the individual concrete panels.

Visitors enter the building through discreet side entrances. Admission is free and everyone is welcome. This is, as it were, a constructed democratic concept: the art space as public space. The ubiquitous commercialism in the form of a museum shop or café is not to be found.

In this way the architects also send a strong message about sustainability – which, from their point of view, includes the fact that a building is a living entity, is repeatedly visited and supports the needs of the urban community. At the rear, the eleven-storey building opens up in cascade fashion to a small garden with transparently flowing transitions between indoors and outdoors. The energy company ST International has its offices on the upper floors.

Company founder SungYeon Yoo initiated the SongEun Art Foundation in 1989, and today his son continues this life’s work. The exhibition spaces include the lobby on the ground floor with its expansive sculptural spiral staircase made of concrete, various daylight rooms and artificially illuminated rooms on the first floors, and the basement with its special cave-like atmosphere, as the architects describe it.

“Just like the carefully considered architecture, the lighting aims to display the art in the best possible way, thus providing visitors with a genuinely special experience,” states Laurencina Farrant, Director of the SongEun Art Foundation.

The typical linear ‘tubes’ for diffuse general lighting of course appear as the architects’ signature. However, Eclipse spotlights from ERCO are used throughout for display purposes: wireless controllability via Casambi as well as the high flexibility and wide selection of light distributions were benefits adding weight to the choice of lighting tools. Thanks to the extensive pool of luminaires, new projects and exhibitions can be displayed conveniently, individually and effectively.

Track and spotlight housings in black as well as the low luminance of darklight lens optics make the lighting technology practically ‘invisible’ – light instead of luminaires.

A centre for art with premium architecture in the middle of the Gangnam business and fashion district: the SongEun Foundation thus sets an example that is more than just a glittering surface. A seductive, urban place of contrasts becomes a stage for exchange, encounter and art.