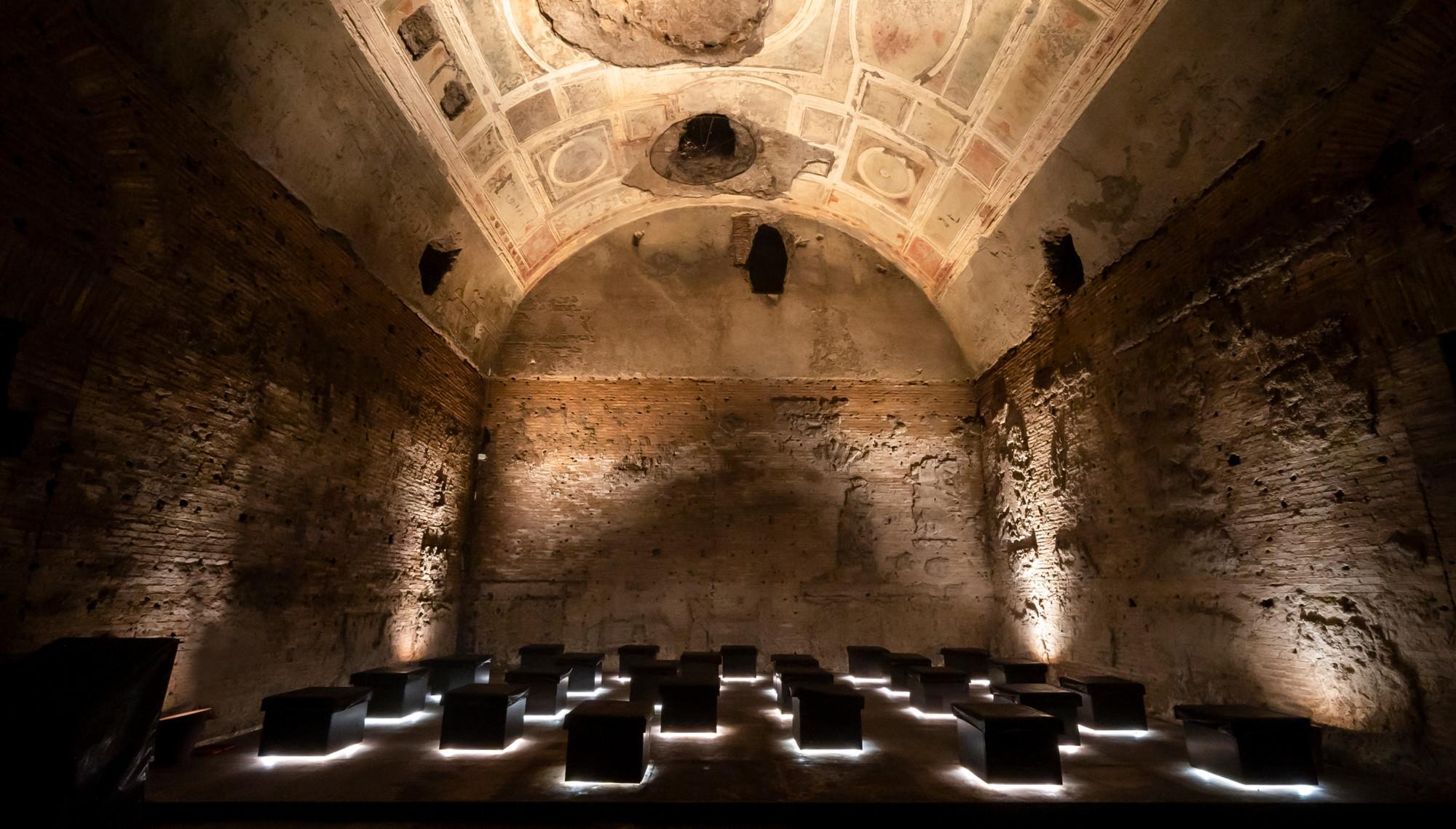 Close to the Colosseum, the Domus Aurea has been called the most extravagant construction in the history of Rome. Built by the Emperor Nero in 64AD after the Great Fire of Rome, the palace was part of his grand plan to transform the capital into a new city. Uncompleted, the ancient structures remain buried underground as they have for centuries. However, following the latest restoration project, a new entrance kiosk and pedestrian walkway by Stefano Boeri Architetti will now allow unprecedented access to its subterranean rooms, each illuminated by ERCO with specially tailored solutions.

The Domus Aurea – or Golden House, with its excavated passages, vaults and hundreds of rooms have been closed to the public for much of the past several decades as the site is rescued and restored. Buried beneath metres of parkland mud, the 2000-year-old palace is continuously attacked by water, corrosive salts and tree roots. It was in this hostile environment that ERCO had to realise the robust but sensitive lighting scheme that reveals the scale and beauty of the original art and architecture. The scheme also had to use the locations of the existing, outdated lighting system and could not interfere with the ancient structures.

The key to the design is the Kona range of IP65 exterior-rated, corrosion-resistant projectors with a wireless lighting control solution.

The Domus Aurea was rediscovered in the 15th century and inspired Renaissance painters such as Raphael. The lighting concept aimed to recreate that sense of revelation as individuals bearing only torches or candles explored it for the first time in 1400 years. For this, and conservation reasons, light levels are kept low, allowing the eyes of visitors to adapt as they move through the rooms, and there is a consistent warm light (2700K) throughout except where daylight effects are recreated.

Although the new scheme has a much lower luminance level than the original, the vastly improved light distribution now reaches the ceiling and has brought to light paintings that had not been seen before.

Along part of the Criptoporticus, a 130m-long corridor, Kona luminaires sit in 1.8m-high, floorstanding, cone-shaped Corten steel housings, evoking torcheres. Here Casambi controls tunable white light making the scheme subtly dynamic. As visitors approach, a sensor activates these fittings which glow into life in succession. They then switch off, giving way to further Kona luminaires concealed in the small, high-level window niches. With a cooler 4000K colour temperature, these give a realistic impression of the daylight that would originally have entered the space.

Casambi-controlled tunable white lighting is also used in the Nymphaeum of Polyphemus, a small temple that originally featured a fountain cascading into a central basin. As the guide explains this to visitors, the sense of the water is conveyed by very cool light (5000K) where it would have originally flowed.

To meet the exacting technical and aesthetic standards of the project, ERCO worked closely with the client Roma Capitale and the producer Electa, with whom it had previously successfully collaborated for an exhibition on Carravagio.

‘We had a constant and consistent relationship with ERCO. We shared all decisions, and this lead to an absolutely prolific collaboration that delivered an absolutely spectacular result,’ said project architect Stefano Borghini.

The Cathedral of Siena