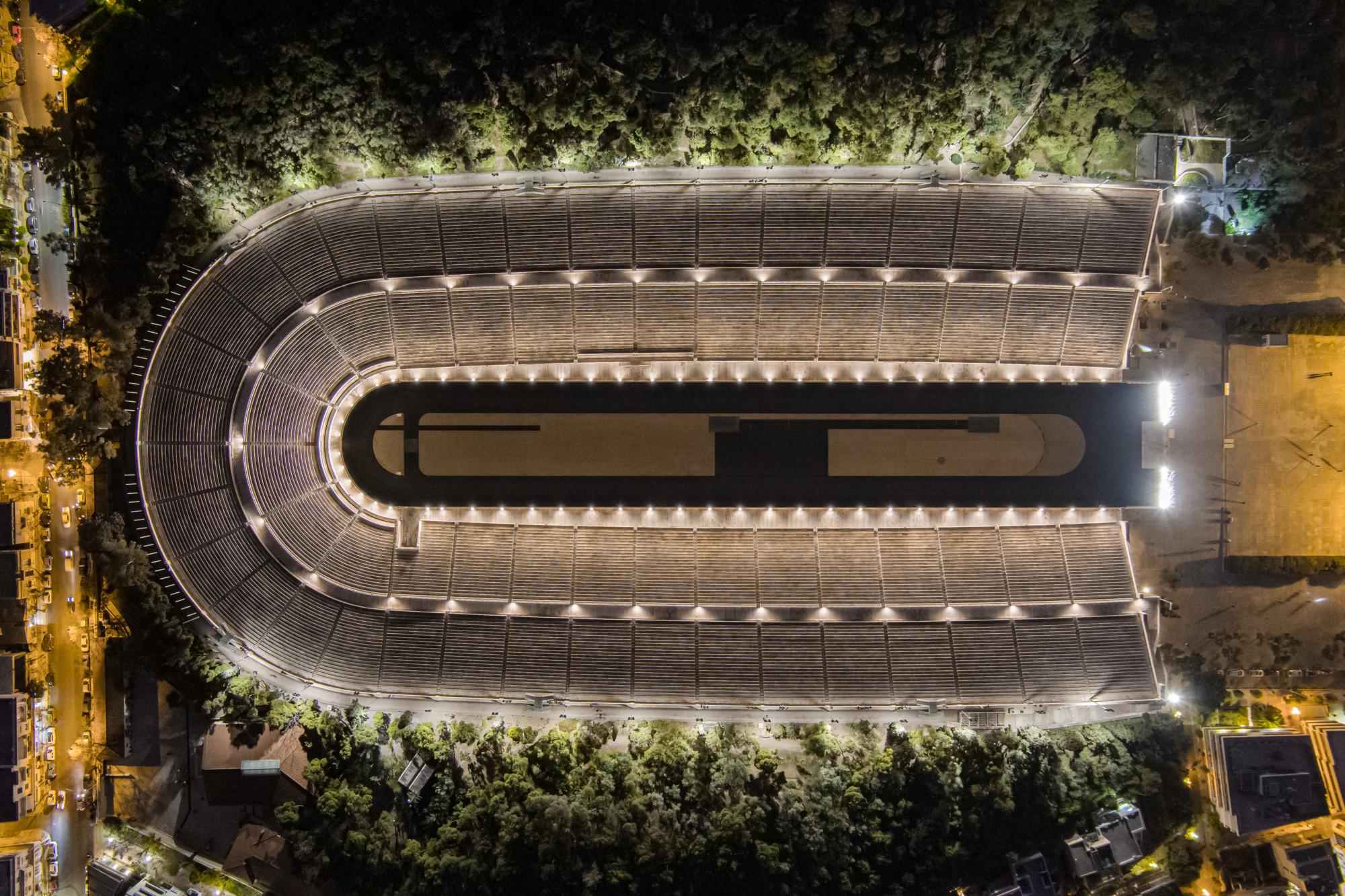 The Panathenaic Stadium in Athens has a new wireless lighting system. Ordered by the Hellenic Olympic Committee to protect the sacred building while significantly enhancing the venue’s sustainability claims, it has been designed by Lighting Art and commissioned by Electron. The installation comprises over 3,600 LED bulbs and features Casambi-powered DT8 DALI Tunable White with an Electron Elegant Max custom lighting projection system.

The Panathenaic Stadium in Athens is a glorious space. It’s the only stadium in the world built entirely of marble and has a rich history dating back to 338 BC. But most people know it for being the starting point from where the Olympic flame sets off on its journey to the host cities of each Olympic Games. The famous monument has a seating capacity of 50,000 and its sheer scale makes it visible from many points throughout the Greek capital.

The Hellenic Olympic Committee considers it their duty to preserve and highlight the legacy of the site and its incomparable beauty. As such, they ordered a new wireless lighting system to replace the previous one, which was energy-hungry and highly light-polluting. They wanted a system based on modern environmental requirements, which would be able to control luminosity and color temperature as night falls.

“Ancient monuments are not merely architectural projects, they are symbols that have a huge history which they carry throughout the centuries. A monument has the ultimate viewing during the day. But, when night falls and it ceases to be accessible, the monument becomes a modern work of art that carries the history of centuries. There, the light has a catalytic role in highlighting the mythical dimension of the monument as well as its architecture.’ States George Tellos, Lighting Designer at LightingArt

The challenge, explains George, was to improve the technical characteristics of the lighting system so that there would be a gentle and discreet enhancement of the stadium. Different lenses within each fixture, high CRI, and Tunable White were the main features used to highlight the Pentelic marble. Additionally, they illuminated for the first time a part of the Ardittos Hill, where the green illuminated trees embrace the Pentelic marble of the stadium. This gives a special perspective to the monument.

The new lighting system could only be installed utilizing the 60 pre-existing points and the pre-existing cabling infrastructure ensuring, in this way, minimum interference with the archaeological site. The new lighting system needed to be capable of controlling the custom-made DT8 Tunable White Led arrays through time-based scenes, remote programming, and control capabilities. Wireless Bluetooth control using the Casambi app provided the solution needed to control 360 custom-made fixtures used for the stands (Individual control for each array of 6 luminaires).

The new lighting system significantly enhanced the sustainability claims of the venue. Light pollution has been reduced by 70+% and energy requirements by half – pleasing Presidents of both the Hellenic and International Olympic Committees:

“This historic stadium stands as a bridge uniting the ancient games with the modern Olympic Games while maintaining their timelessness and universality in the eternal journey of time […] it is our duty to continue to highlight the legacy of the Stadium, its role, its importance, and the incomparable beauty it reflects.  The renewed lighting offers even more light to our historical monument and to the heart of Athens.’ HOC President Spyros Capralos, President, Hellenic Olympic Committee.

“Greeks gave to humanity the gift of the Olympic Games and also the gift of Democracy. With the new lighting of the Panathenaic Stadium, this heritage will become even more brilliant and will enlighten the entire world […] In addition to the glow, with the new lighting you also set the example for technology that remains inseparably linked to sustainability.’ Thomas Bach, President, International Olympic Committee President