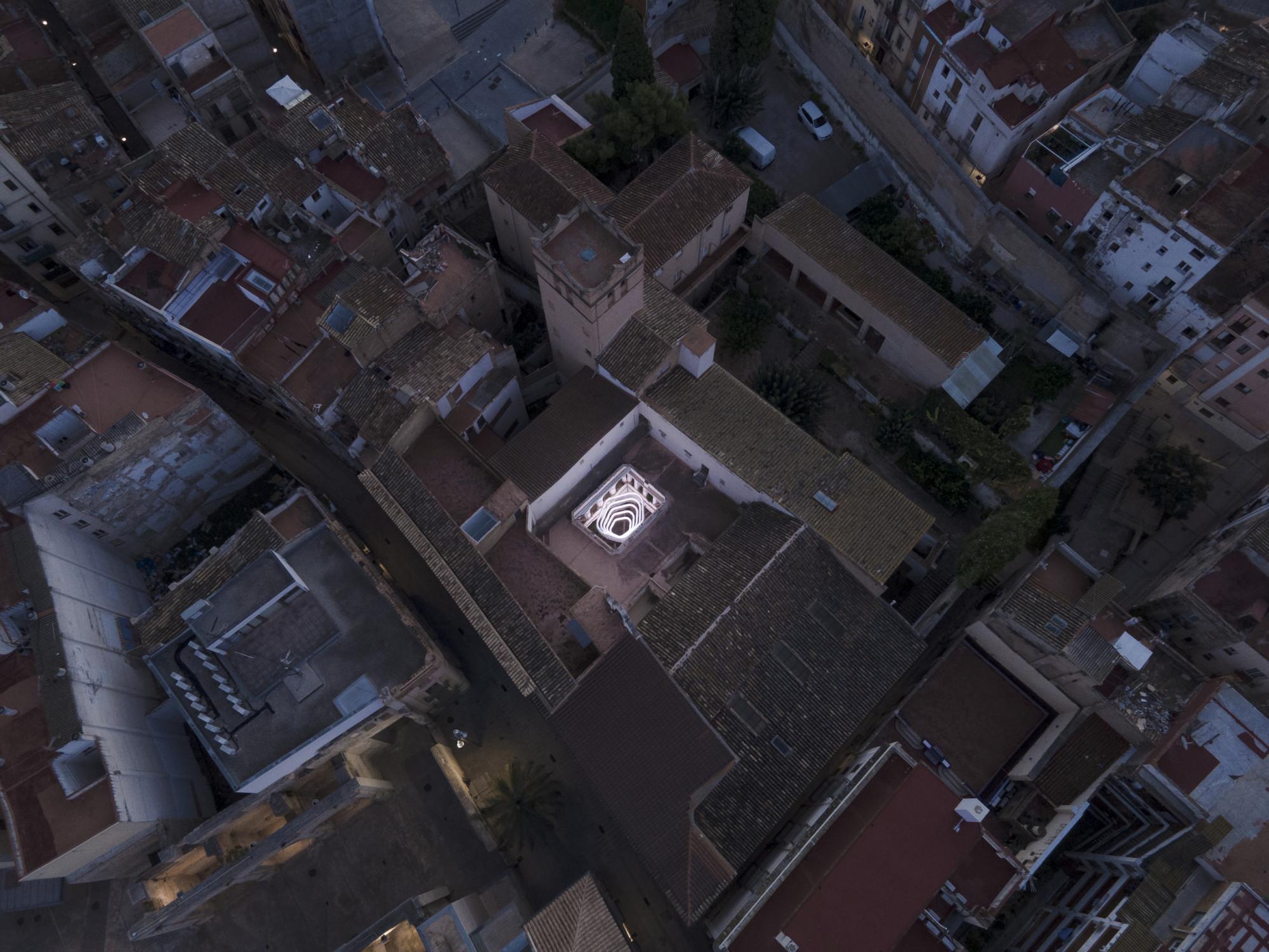 A monumental-scale lamp inside the Purissima Concepció monastery in Tortosa, Spain.

‘Lucerna’ is a temporary urban installation designed by Manuel Bouzas and Santiago del Aguila for ‘A Cel Obert’ Architecture Festival 2021, which took place in Tortosa, Spain. With a height of more than 6 meters and a surface area of 55 sqm, this monumental-scale lamp occupies the main patio of the Purissima Concepció Monastery, radically transforming the 17th- century building through light and color.

The festival seeks to promote the heritage value of the historic center of Tortosa. Through a series of temporary installations, numerous patios and cloisters —which used to remain closed to the public throughout the year— are opened to the city. Parallel to this, several events such as conferences, seminars and guided tours take place during the festival in order to bring Architecture closer to the people. The spaces where communities used to meet in the past, are reactivated again through architecture and art.

The conceptual origin of the project stems from the double interpretation of the word ‘Lucerna’. Nowadays, this term defines the upper openings which serve to introduce natural light into a space. However, it was also used by the Romans to name the ancient ceramic oil lamps that produced light in the dark. In other words, the first lamps in history.

For this reason, the proposal explores the intersection between both notions to present a contemporary reinterpretation of the classic lamps that used to illuminate the most iconic sacred spaces in history, from the Reims Cathedral to the Hagia Sophia Mosque.

In collaboration with the lighting designer Ana Barbier, the authors build the project with six wooden rings, which are covered by a LED light strip on their inner edges. Through a light structure made up of wires and turnbuckles, the piece hangs down from the cornice of the patio. A corrugated translucent fiberglass membrane covers the rings to guide both natural and artificial light to the ground. It is precisely here that a small staircase lifts the visitors up to the interior of the lamp, allowing them to discover the ‘Cel Obert’ (open sky), framed by the organic shape of the piece.

When night falls, the lamp becomes a vibrant vessel of light that transforms the patio through its brightness and color. This color overflows the boundaries of the monastery until it reaches the street, where thousands of people from Tortosa are invited to discover and reactivate the forgotten and hidden spaces of the city.

Casambi’s CBU-PWM4 modules are integrated for each LED RGBW strip. During the day the light transitions in shades of white from 2000K at sunrise and sunset, to 6500K at midday. At night the scenes played with colour. The scenes were programmed in the app and were automatically activated and deactivated according to the time, without the need to be present at the installation.